We’ve had a look at the many, many lists out there of things you’re supposed to do before you turn 25.

Some of them make sense (‘like yourself’), some sound unnerving (‘spend 24 hours in isolation’–watch out for our next installment….) and lots that you (hopefully hopefully) did many years ago (‘get an email address that nobody else has access to’).

Most of them are, however, ridiculous and there is no reason you should have done them by the arbitrary age of 25. Or 95. or 32.

So we’re going to try some of the ones we think are a) stupid b) doable c)both stupid and doable and then you can listen to us chat about what it was like.

Challenge #1 GO ON A BLIND DATE.

Hear what our blogger thought of his blind date experience. (AUDIO-AWK?)

Google Ngram Viewer: How long has the phrase ‘quarter life crisis’ been around?

We know the phrase ‘quarter-life crisis’ hasn’t been around for long, but here’s the proof it really is a phenomenon. By typing ‘quarter-life crisis’ into Google Ngram Viewer, the graph shows  QLC only started appearing in books after 1997 and even then it was barely written about. Since 2001 the phrase usage has sharply increased. Even though the Google data only goes up until 2008 we think, judging by how many books and articles have been written about QLCs recently, that the line would keep shooting upwards.

But who first used the term QLC?

Wordspy has cited the first use of the word in a 1998 episode of the  TV series Ally McBeal. Who knew those neurotic bathroom dwelling lawyers would be so ahead of the game? 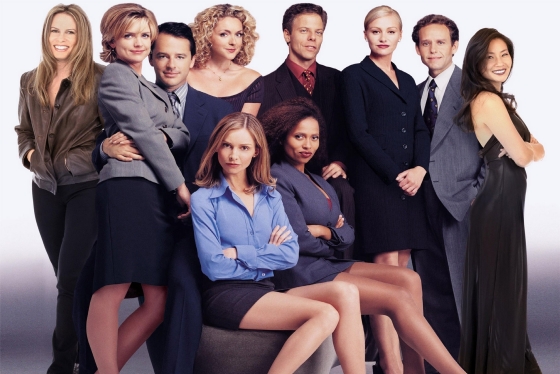 Are you Quarter Life Jobless?

Struggling to find a job? Stuck sending off CVs en masse to uninterested corporate bigwigs? Well, at least you’re not alone. The latest figures from the Office for National Statistics (ONS) show that unemployment has been shooting up since 2002 – and people in their 20s are a big part of it. 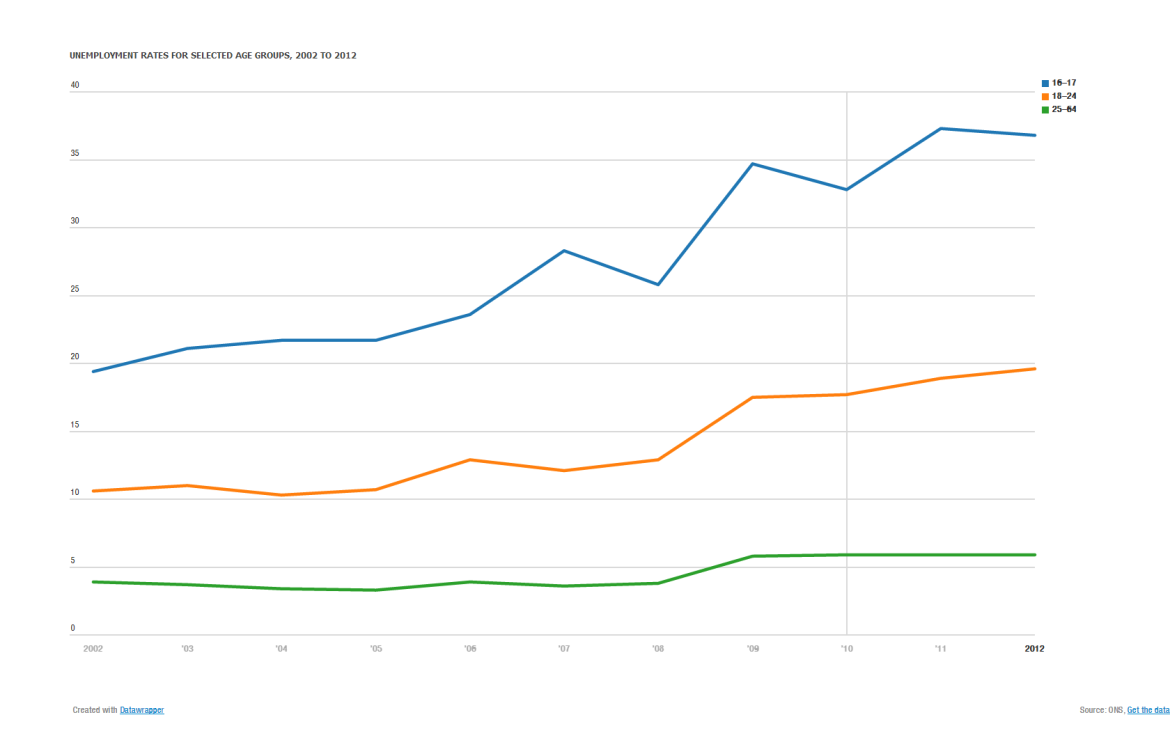 You can see the full results here. There are very clear trends to observe here that won’t come as a surprise to anyone who’s spent a good afternoon browsing job sites and weeping copiously.

For another view on it, here the figures are stacked on top of each other to make a sort of depressing tower of jobless (Click for larger image): 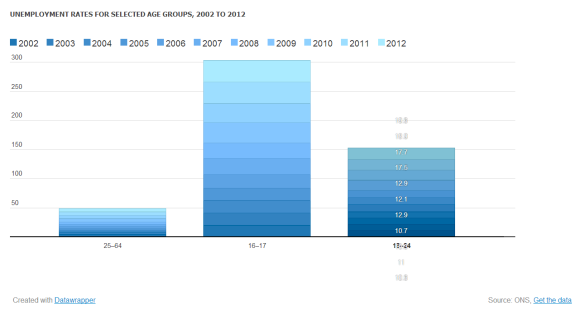 Still, this are tricky numbers to analyse; millenial unemployment is pretty poorly represented in this sort of data, as the boundaries are too broad. 18-24 gives us the beginning of the age group we want, but 25-64 swallows up the rest of it, and leaves us unable to make strong comparisons.

However, if we do look at the 18-24 data, and assume that similar trends would apply later on, the picture is predictably depressing. Take a look at the number of unemployed two years ago compared to just 10 years before that: 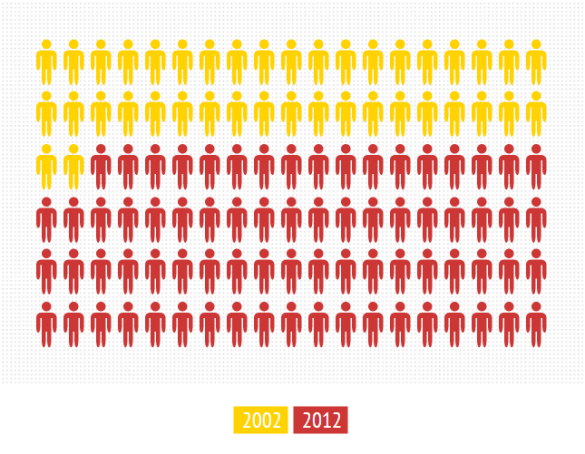 Things now seem to be improving, but unemployment is still at a higher rate for people in their mid-twenties than it was not so long ago. For our generation, technically these findings are a win-win – if you have a job, you’ve beaten the odds.

If you haven’t, well – you’re not alone. 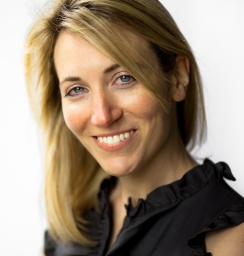 So, you’re having a QLC.You don’t like your job, but making a big change seems much too scary. Alice debunked some QLC myths in part 1, here’s part 2 where she tells you what to do next.

Alice, is there something we can do about this rabbit-in-headlights anxiety, or should we just embrace denial?

Consider what your motivations and interests are. Think about what your priorities are in life.

People used to have one straight career path but generation Y is much more about variety and breadth. There’s the idea of portfolio careers, working part time here and there.

You get scared by thinking: “How do I fit my unique self into this box which I think I should be in?”

Think about where your dream has come from, and if it is still yours. Is this what you want, or is it what your parents want?

What’s the first step out of a QLC?

When people come to me, I tell them to spend time researching different career options.

Lots of people don’t make changes because they think they have to quite a full-time job and leap blind into the unknown but you don’t have to do that.

Give yourself six months to shadow people, go to events for those professions, talk to people in those worlds. Test the water, so you’re not giving everything up in one go.

Has anyone ever done anything drastically life-altering after coming to you for QLC help?

Most changes are small but crucial.

There was a client who was in IT software who wanted to travel so  we worked out a practical plan for that. She emailed me a few weeks ago to say she’d handed in her notice and had gone away for 6 months.  She said: “You know what? If it doesn’t work out, I’ll just come back.”

I had a secretary assistant who wanted to teach. We talked about getting her boss to let her work four days a week so she’d have one day to spend in a school and get some experience.

Thank you to Alice for chatting to us– great to get some expert advice.

If you want more QLC wisdom, have a look at Alice’s new project, Mind The Gap . It’s  a community (online and real-world) for people in their 20s and early 30s who would like some support in their post-uni/ adult life confusion.  The coaches are almost all quarter-lifers themselves, so they’ll get what you’re talking about. 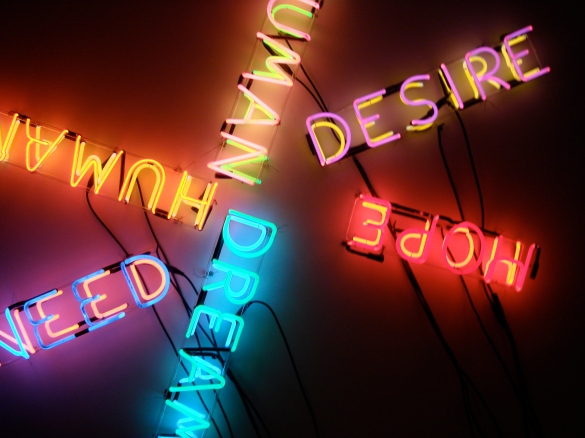 “I honestly felt like this was going to be it for the rest of my life. I know that sounds pathetic, but I was really depressed about it. I just wanted so much more.”

Some parents call it whining. Others call it soft. Our naivety is questioned. But what do they really know about the quarter-life crisis?

There’s no question about it for 26 year-old Sarah Harrison – the QLC is a very real experience.

Fresh out of the University of Nottingham and raring to crack the glass ceiling, no one could have predicted that in the space of two years she’d have quit her job and moved back in with her parents. Feeling disillusioned by the life she was once so excited about, she sank into clinical depression.

For the then 24 year-old, working in London as a Sales Executive for a publishing company “wasn’t enough”. She says: “I came out of uni, out of three years of freedom essentially, thinking that life could only get better. I’d be getting paid more money than I’d ever earned in the past, I’d be in the middle of the city, I’d have a job that was respected. I was meant to be proud.”

But the reality of long hours, deadlines, and rainy commutes into the midst of glass towers and grey concrete soon hit home.

Her face drops as she reflects: “Everything just seemed so dreary. I’d always pictured the city as some vibrant centre where everything was going on.”

In comparison with her parents’ home in Cornwall, the city had initially seemed like a haven. Stylish bars filled with classy people were around any given corner – opportunities for fun were hardly scarce.

But along with people came competition, and along with money came stress.

“I just felt like I was in this huge race against all my co-workers! We were all mates outside of work but as soon as we got in it was just go go go, sell sell sell.”

“Everything just seemed so dreary. I’d always pictured the city as some vibrant centre where everything was going on.”

When posed with the question of sacrificing independence to move back in with her parents she pauses, leaning on her elbow in thought, before admitting that there’s things she misses about living in the city: “The thing is, without the 12 hours of commuting and working, and the constant pressure from work, the city would probably have been great. But after a year of that lifestyle I was shattered. I needed to stop.”

However she maintains that she “won’t go back” to the city unless it’s for a job she’s certain she’ll enjoy.

“Right now I’m at a place where I’m just deciding what to do. Which is great while I’m at my parents, as it’s the complete opposite to the city so I can just relax while I get back on my feet and figure out where I want to be – as soon as I know that, I’ll be out and trying my hardest to succeed again.”

To hear more defence of the qlc, check out this post on Molly Mahar’s life coaching website, stratejoy.com.

The newspapers have plenty to say about QLCs; Some of it useful, some of it alarmist, some of it funny and some of it totally missing the point.

Here’s our collection of the best QLC articles.

See what you think. 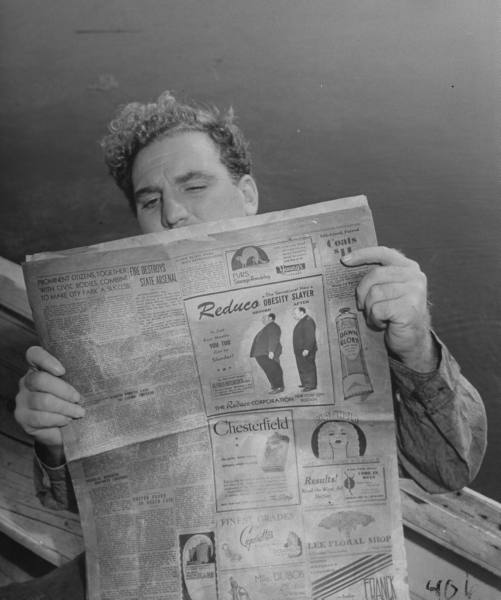 If you read an article you reckon should be on the QLClueless list, send it our way to qlclueless@gmail.com